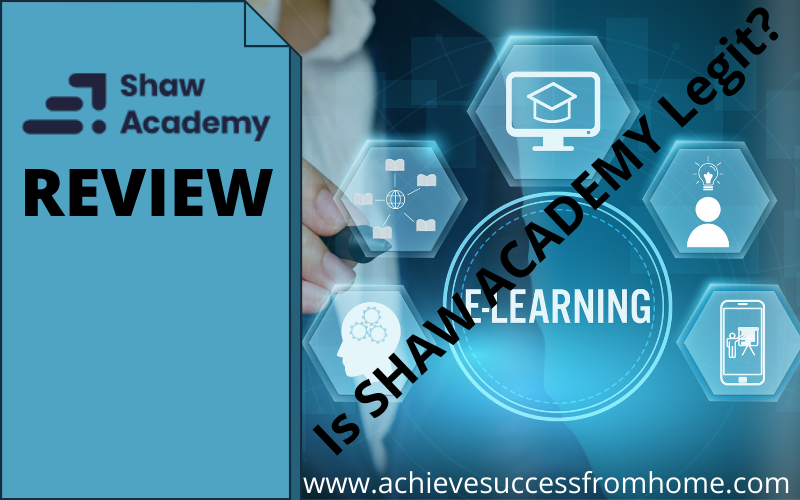 Welcome to The Shaw Academy Reviews

More and more people nowadays are taking to online learning rather than traditional learning at schools and colleges.

Of course, you could find the information that you wanted through social media sites like Youtube and for some things it is great, but in general, what you do find is that the information is spread out and that’s where eLearning sites come into their own.

With e-learning such a competitive niche with regards to training platforms, there are some well-established sites like Udemy,  Coursera, and Edureka to compete with.

Shaw Academy really took off with reports that in 3 years leading up to November 2016 they were seeing as many as 400,000 students a month.

But, don’t get your credit card out just yet as I’m sure you will find this Shaw Academy review interesting reading.

So let’s dive in and see what Shaw Academy has to offer.

Price: As of this review, the First 4-weeks is free, then monthly or periodically which will be discussed a little later.

Summary: There’s a warning on TrustPilot which is a top review site, about Shaw Academy using their influence with reviews on their site, such as asking customers who have submitted negative reviews to either delete or change them.

As you are researching courses, have you ever thought about affiliate marketing and what it could do for you?

In fact, if you didn’t already know Shaw Academy operates its business within the affiliate marketing industry.

This is a proven business model that actually works, just take a look at these people who are still active in the same training platform.

What is Shaw Academy about?

Shaw Academy is an e-learning platform that was founded in Dublin, by James Egan and Adrian Murphy in 2013.

Become popular with students in the US, UK, Canada, Australia, South Africa and India.

However, for me, it is somewhat lacking in the number of courses offered, and really not big enough to compete with most of the other e-learning platforms that are out there.

Udemy alone offers over 100,000 courses and around 7,000 free courses that cover anything you could possibly think of.

At Shaw Academy, the first 4-weeks are free followed by a monthly fee which can be paid periodically, although I don’t think you will benefit too much due to the number of courses they provide.

Just looking at their website, they state there are over 100 courses but as of this review, I found only 79 courses which are quite disappointing.

According to their Facebook page, they have quite a following of over 1 million likes and 12 million students.

I see this site as very niche and I don’t know about you but the 12 million students they declare on their website, I just can’t see it.

Who are the founders, James Egan and Adrian Murphy?

James Egan, with a master’s degree in commercial law and for a short period, was an analyst working for a couple of hedge funds.

Based on the knowledge he picked up in trading, he decided in 2012 to start an e-learning platform based around financial trading called the Academy of Financial Trading.

As of this review, this business is not operating and it looks like the courses have been moved over to Shaw Academy.

It looks like he is no longer committed to Shaw Academy but did go off and establish a couple of successful businesses, Capserv and Fitness Data Science.

In 2017 Shaw Academ founded the company Phoenix, which was to cater for the increased numbers of students, but in 2017 they fell into financial difficulties, owing 5.7 million euros.

Who is Shaw Academy for?

To be honest Shaw Academy isn’t going to appeal to most people due to the limited number of courses they offer compared to most of the other e-learning sites.

However, online learning is becoming very popular in recent times, especially since this pandemic started and therefore I’m sure it would be worth a quick look.

In the 7 short years Shaw Academy has been operating, I would have expected the course list to be a lot more extensive than what we are seeing here.

You can check out the individual courses here.

The courses are run on Monday and Wednesday only, not like some of the more popular training platforms where you can study anytime you like.

The whole point of learning online for me is to pick up wherever you left off and not to be restricted like they are doing at Shaw Academy.

After all, the courses are not live and should be available at all times, like Udemy where the courses you pay for are accessible for life or until it is taken down.

I personally think the learning structure is set this way to extend the amount of time it will take to complete the first course.

The following types of premium membership…

When you signup for your first course the first 4-weeks are free.

Then you can pay either monthly which as of this review would be around 55 Euros or take advantage of the big discounts as can be seen above.

If you only want to take advantage of the 30-Day free membership then make sure you give enough time to cancel the membership as we are seeing many issues with this.

Resources, such as Toolkits and certification would have to be paid separately.

What other’s say about Shaw Academy

We are seeing many complaints on many levels which is unusual for an e-learning training platform. 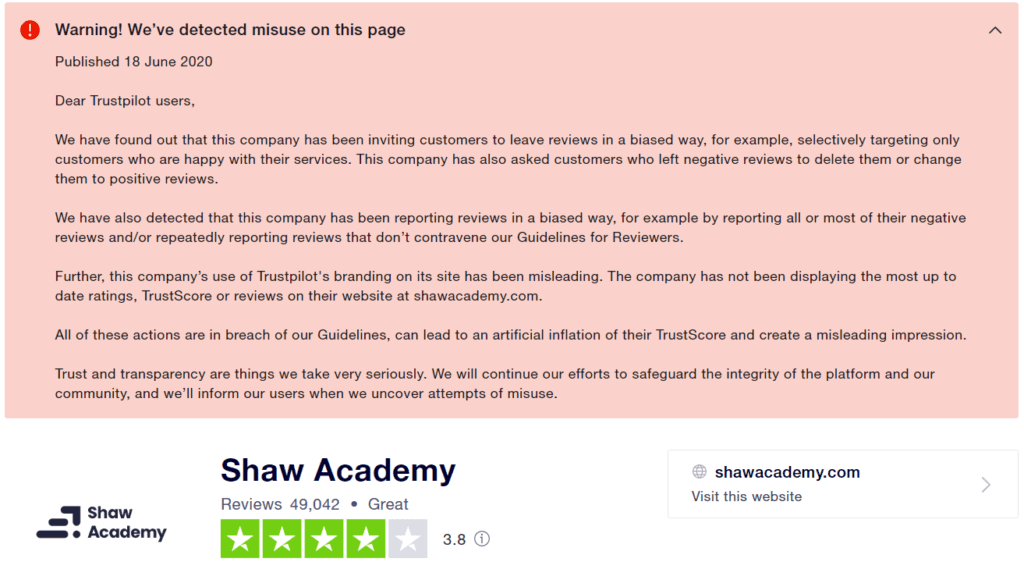 It normally takes a lot for someone like Trustpilot to get involved and make a statement like the one above. 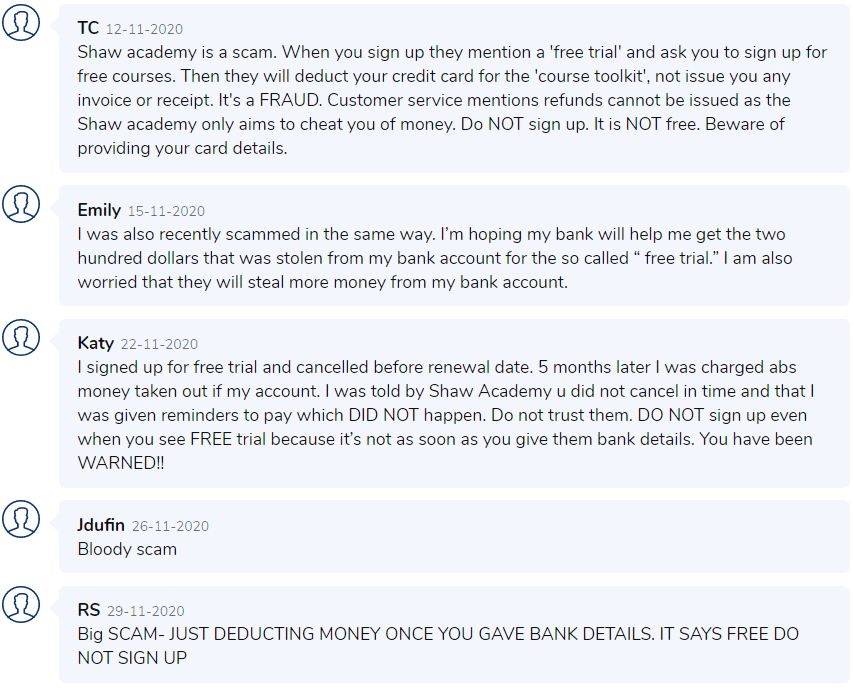 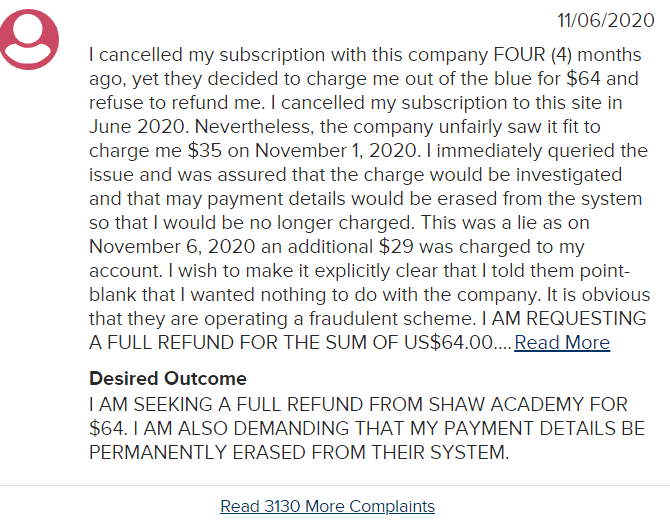 The above complaint whilst resolved comes from the Better Business Bureau and if you look at the bottom of that review, there are a further 3130 complaints.

That amount is something I have never come across on the BBB site before.

I did check a number of the 5-star review ratings on Trustpilot and many of them did look a little dubious, to say the least.

Reviewing Shaw Academy has been an eye-opener and one I would not recommend, in fact, there isn’t much I like about this company.

The only problem we are seeing is that members are getting charged regardless of whether they are on the free period or not.

Unfortunately, we found many more negative issues than we did positive ones.

What we found on the BBB were over 3000 complaints which are extremely unusual.

This seems to be a major problem amongst members and past members which can be seen through the number of complaints within the BBB.

Not as popular as you may have thought.

Its to be expected that Shaw Academy would pique interest around March 2020, which happens to be the start of the pandemic. It didn’t last long though.

For an eLearning training platform to compete at the top level, 79 courses are nowhere near enough.

With the courses only available on 2 days throughout the week, I see this as a way to ensure the course extends beyond the 4 week period which is when the fees would kick in. Of course, this is only my opinion

The BBC watchdog series is a consumer tv program that highlights businesses where large amounts of customers have complained and here is the link to that webpage here.

How to Earn with the Shaw Academy

If this training platform is for you which could mean spending a certain amount of time studying there, then why not take advantage of their affiliate program where you could make between $5 and $15 for each new member who enrols on a course.

Affiliate marketing is a very prevalent business model that anybody can learn, and if you need some guidance, then you can check out an article that I wrote which explains it in more detail here.

Is Shaw Academy a Scam?

Shaw Academy is definitely not a scam although there were a lot of issues that we did find whilst researching the company.

What is clearly evident is the lack of courses which means they aren’t able to compete with the other sites which also means they don’t have courses to allow the student to improve on their knowledge.

Those students would eventually move on to the other popular sites to improve upon the skills they had learned at Shaw Academy anyway.

I think you’ll agree there are more issues with Shaw Academy than you probably would have thought.

Prior to us researching this company it was just another eLearning platform with good reviews and a good student base but things started to unravel pretty quickly.

If you are looking for a reputable eLearning platform there are many out there that allow you to progress your skills further such as Udemy or Coursera of which I use both and would highly recommend.

If you have an interest, a hobby or anything you have a passion for then why not turn it into a lucrative business?

Wealthy affiliate has been going since 2005 and with over 2 million members, taken many of them from complete beginners with absolutely no knowledge at all, through to become successful marketers.

I have been a member of that very same training platform now for the last 3 years.

Just check out these success stories for yourself which were pulled at random, simply because there are so many of them…

I sincerely hope you enjoyed this review and that it answered most if not all your queries about Shaw Academy.

If you did then please feel free to share amongst your family and friends on social media to make them better informed.

Any questions at all please put them down in the comments section below and I will get back to you at my earliest convenience.

Until next time, stay safe.

Hey Guys and Gals, Great to meet you and I hope you enjoyed this post. I have to be honest with you, my journey into making money online started with several MLMs and they just didn’t do it for me. In fact, my experiences were so bad I nearly decided to call it a day. That was until I came across affiliate marketing and realized this was where I should have been in the first place. NO inventory, No recruiting, No fees, No cold calling, and this can be done anywhere in the world. All I had to do was find out what 4.5 billion were searching in Google for and with over 7 billion daily searches in Google shouldn’t be too much of a problem. View all posts by Mick

Want to work at home and tell that boss where to go? 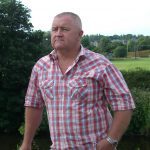 making money online most of it is absolute garbage! I should know I have tried them, but I eventually found ways to make real money that are Legit and that I can recommend.

Check them out, any questions don’t hesitate to ask!    Enjoy!

Want to Earn a 4/5 Figure/Monthly Income? 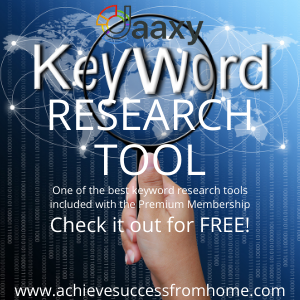 Success is just around the corner

You can find out more about which cookies we are using or switch them off in settings.

This website uses cookies so that we can provide you with the best user experience possible. Cookie information is stored in your browser and performs functions such as recognising you when you return to our website and helping our team to understand which sections of the website you find most interesting and useful.

Strictly Necessary Cookie should be enabled at all times so that we can save your preferences for cookie settings.

If you disable this cookie, we will not be able to save your preferences. This means that every time you visit this website you will need to enable or disable cookies again.